Facts on Stigma and Discrimination

Eliminating mental health stigma and discrimination is the first and foremost challenge facing any employer wishing to respond to the mental health needs of their staff.

Facts on stigma and discrimination

Stigma is where an an employee (or potential employee) is perceived as being different because of their mental health problems. Prejudice about mental health may be conscious or unconscious.  If  a member of staff is treated differently by managers, colleagues or a recruiter, this may also be discrimination and might be against the law. 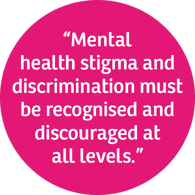 Stigma takes many forms. In some cases, it can be very blatant – such as when people use insulting phrases like ‘nutter’, ‘psycho’ or ‘they're mental’ which can be extremely hurtful. In other cases, it is more subtle - being left out of discussions by colleagues or being talked about behind backs.

At its worst someone might lose their job. A recent UK wide stigma survey found that one in five people had lost their job due to stigma. It can also result in being written off for promotion or a new job because of uninformed assumptions about whether they would  be able to cope with the new responsibilities.

In all cases, stigma and discrimination can  undermine  morale, causing loss of  self-confidence and self-esteem.

Why talking about mental health is so important

See Me surveyed 1165 Scottish workers, the results highlighted a number of key issues: