When Stigma is Present

Nadya Kuhl, Occupational Health Manager at Scotrail, speaks about how they dealt with stigma through the Workplace Equality Project.

Nadya Kuhl, Occupational Health Manager at Scotrail talks about why they got involved in WEF, the challenges they faced and how they are going to continue to move toward a workplace free from mental health stigma and discrimination. 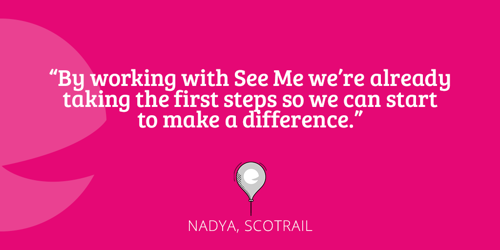 We got involved in the project as we saw it as a brilliant opportunity to try and emphasise the fact that Scotrail as a business want to try end the stigma around mental health.

It's quite apparent when you come into the business that stigma is present. We've got a culture at the moment where people feel it's not okay to say that they're depressed, or they've got anxiety, or they've got any mental health condition because the stigma attached. Don't get me wrong, there are some areas that are really good with how they deal with it. But there's some areas where it is - they do feel scared to say anything, so they work with it and try to - you know, they don't mention anything, don't get any treatment.

Working with See Me, the impression that we first got was that they were very passionate about what they do. They want to end the stigma, as do we.

With the initial survey, the answers we got back, we weren't surprised by them. I was already aware of the fact that stigma is present throughout the workforce. However, seeing them on paper, seeing the comments that came along with them really just lit the fire to say we really need to do something about this.

With surveys in general our staff are a bit reluctant to fill in surveys because they are under the impression that sometimes when they fill in surveys that not a lot is done afterwards. So, when we sent this out, we got a really good turn out from it.

The interviews that See Me had were with various members of Exec Team, were with the unions and the feedback I got from them was really positive. They fed that back and a lot of it is stuff that is really doable, which is really positive. It's going to take a long time, but we're going to get there at the end. 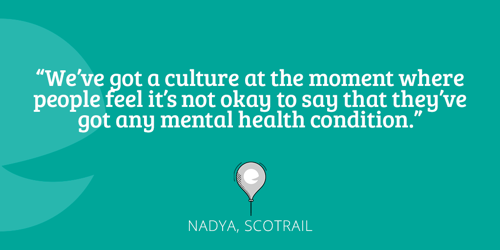 The main focus that we were looking at - what came out after the survey was that they felt maybe managers didn't have the best experience in dealing with anyone with a mental health condition. It was also about the fact that they didn't really know where to go for support. So, we've taken steps in that we've got our managers starting on a training programme, we're working through that. We're also in the process of designing, [ZCARDS] which has all the information about the support that ScotRail can offer, but also other agencies that can provide help as well. We're looking at introducing mental health first aiders, that's another one where people who may not feel confident speaking to their managers could then speak to a mental health first aider who could point them in the right direction for support.

If members on the ground can see people from high up that are passionate about this, then they're not going to be scared about coming forward. If one of their managers comes forward and says I've got depression, anxiety or PTSD, then they'll maybe think, oh, it's okay, I've got that too. He's / she's spoke out about it then I can speak out about it as well. So, I think it's one of the most important things, is to have our higher up management behind this.

We want people to talk. Time to Talk's a massive event and for one day, if somebody could just have that one conversation, who knows where it could lead to? If that one person has that one conversation and another person sees them having a conversation, then we're just starting a catalyst of people talking about mental health. Good mental health is absolutely good for the business too. If you've got good mental health, your attitude is different on the ground. Your home life is different as well. So, we need to look at work life balance as well.

The highlight of the pilot was working with See Me, but also working with other companies to see what they do to gain best practice. The highlight again was working with our people, it's to find out, you know, getting on the ground, finding out people's stories. I've had a lot of people come to me with individual stories and that's a good thing. It's seeing their journey from being able to give them support because it's an awareness that we're trying to do this. So, a highlight for me personally, is when somebody comes to me for support, gets the support and then they're feeling better about themselves. But ultimately about the pilot, is the fact that we're raising awareness is the main thing, and for people to know that we actually care as a business. 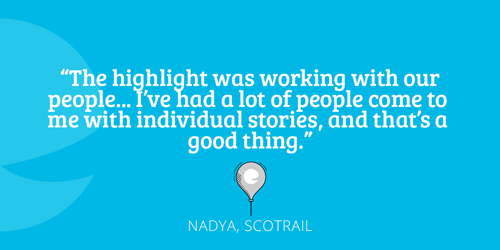 My definition of mental health is that everybody has mental health, be it good, be it bad, everyone has mental health. When we speak to employees or managers, anyone on the ground, when you say mental health, it's an automatic, oh goodness. But mental health shouldn't be viewed like that. We've got high levels of poor mental health and that's reflected in our absence figures. But this is something again we need to work towards to try and improve. By working with See Me, we're already taking the first steps so I would hope in the future that those levels would come down and we can start to make a difference.