Derek Cummings, Director of HR and Operation at Burness Paull LLP of talks about why they got involved in WEF, the challenges they faced and how they are going to continue to move toward a workplace free from mental health stigma and discrimination. 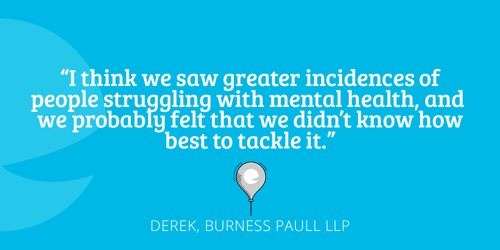 In HR, we're concerned about people's mental health because we came across incidences where people were struggling with their mental health. I think traditionally in law firms and in professional services, it's not been a subject that's really been talked about. It's a high performance culture. People might be fearful traditionally of saying anything that might damage their careers, and we felt that it was something that we needed help and support with, and it's something that we wanted to change, but we didn’t really know how best to go about it.

We genuinely want the best for our people and we want to help and support them. We know that mental as well as physical health is important. We recognised that talking about it and creating a cultural change was probably the first step, and what we needed to do was to make it okay to talk about your mental health. So, that's what we've tried to do as a starting point.

We saw the work that See Me was doing and we were keen to get the credibility and support from See Me to help us address the issue.

We did a survey internally which gave us some good insights as to what was working well, what wasn't working so well. We were doing some work on critical mental health policy. We've done some training recently on mental health and we're going to do some more for mental health first aiders. We also took part in Time to Talk Day. So, it's been a gradual raising of awareness and certain initiatives around training or policy. 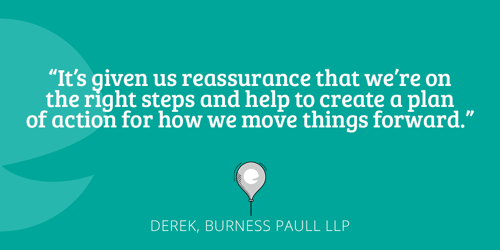 The pilot lets people see that we're taking mental health seriously and we've got the best organisation to help and support us. It's given us a reassurance that we're on the right steps and help to create a plan of action for how we move things forward. So, that's bolstered our confidence in terms of what we need to do. It’s gone far better than we could have hoped. I probably wonder why didn’t we do it before? But you're a little bit fearful when you do these things about how it will be perceived. But actually, the message from everybody has been really positive and I think it's good for staff and has really sparked conversations.

The area that we wanted to work on more was on recruitment and culture; so that people felt that they would be okay to talk about that in advance of having a diagnosed condition. The cultural aspect is really important. Raising that at senior level and talking about it more in the firm is helping to change the culture. We are in a very different position now than we were a year or two ago where people talking about their mental health is more prevalent.

At senior level there's much greater awareness and visibility of mental health and the importance of talking about that. Culturally, we've increased awareness, we've made it more acceptable, more comfortable to talk about mental health, and the third thing is we've put in place some specific training to support managers and people across the business to feel better equipped to support people who are struggling with their mental health. 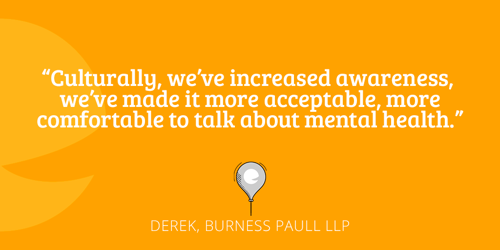 A couple of years ago we did some work with the partners in the firm looking at their mental health and working with someone from who'd been a partner at Deloitte who shared personal experiences. I think that helped for partners to recognise that it's something that impacts everybody, but they have a role to play as leaders to set the culture and make it okay for people to talk about mental health. So, I think the leadership is incredibly important.

I suppose on a personal level the highlight has been the recognition that the firm has had from the Law Society, from out with the business, and how positively it's been received internally. I think everybody feels really positive about the work that we're doing and I think that's great to see.

See Me's expertise and sharing that and sharing best practice of what's worked in other organisations and giving us a structure to follow. That's given us confidence that actually we probably were, to some extent, on the right track, but it's helped us with the survey that we carried out. That was incredibly helpful. Some of the structure around events or Time to Talk Day gives us something to hang on, the conversations about mental health, which is really helpful to raise awareness. 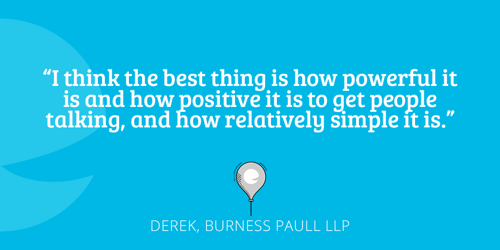