Pass the Badge in Work

Standard Life became one of the first major businesses to join our ‘Pass the Badge’ campaign.

As part of the Pass the Badge campaign, the company gave 50 employees in their Edinburgh office a badge to wear for one day. Those employees then passed the badge on to one of their colleagues to wear for the following 24 hours, who passed it on again to colleagues or family members.

The idea is part of the Pass the Badge campaign from See Me, Scotland’s programme to end mental health discrimination. 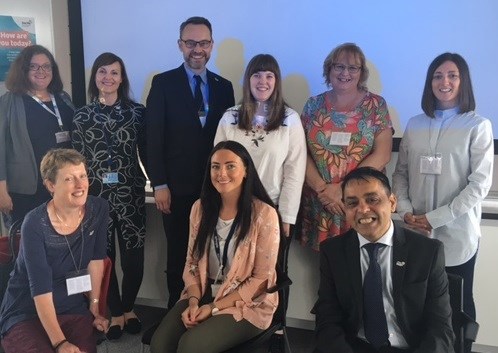 When people are wearing the See Me badge they are encouraged to have conversations on mental health. When they pass the badge on they will share two facts, that one in four of us will experience some form of mental illness in our lifetime and of those who do, nine out of ten report experiencing stigma and discrimination.

The campaign shows that mental health can be a topic of everyday conversation and not something people should have to worry about disclosing. Standard Life want to campaign to get all their staff talking about mental health.

So far the Pass the Badge campaign has started over 10,000 conversations on mental health. The badges have also been passed and worn by politicians, including First Minister Nicola Sturgeon, Mental Health Minister Maureen Watt, former Prime Minister Sir John Major as well as other well-known faces, such as Radio 2 DJ Ken Bruce and singer Lucy Spraggen.

Standard Life kicked off Pass the Badge on June 1st 2017 as part of their Developing a Mentally Healthy Workplace programme. The company became one of four organisations in Scotland to be a See Me in Work partner last year, to improve mental health and challenge discrimination in their workplace.

See Me volunteer Susan Falconer, 49, from Galashiels, spoke at the event about the impact depression had on the way people in her work treated her.

She said: “Due to the stigma around mental illness I find there are times when I’m not taken seriously when I make suggestions.

“This has happened particularly at work. People will dismiss what I say and say ‘oh she is just reacting like that because of her illness’.

“When that happens I feel like I’m being treated like a second class citizen. People don’t take what I say seriously because I have depression.

“My opinions on work matters will be dismissed due to something that has nothing to do with it.

“I want to use my experiences to help other people to be taken seriously so they don’t have to face the same discrimination.

“Everyone is a human being and should be treated equally.”

Catherine O’Connell from Standard Life said: “We began our journey to help end mental health stigma and discrimination in 2015 and have run workshops for over 300 manager and employee representatives since that time.

“Following on from a range of activities during mental health awareness week in May, Pass the Badge is another important  initiative that we are supporting, which will encourage conversations around mental health. “

Calum Irving, See Me director, said: “One of the best ways of tackling negative views is though face to face contact, educating people about the facts and through stories of real life experience. This campaign is brilliant for the simple and effective way it does that.

“It is fantastic to see a global company like Standard Life take this action to challenge the stigma around mental health.”